Itzhak Perlman and Yo Yo Ma together again on this disc available now from amazon, iTunes and retail outlets.
iTunesAmazon

It has been a busy couple of weeks for Itzhak!

Last week, he opened the Boston Symphony Orchestra’s 2012-2013 season with a special all-Beethoven program in Symphony Hall. Itzhak led the orchestra in Beethoven’s two gorgeous Romances for Violin and Orchestra, and then traded his violin for a baton, conducting a rousing, virtuosic performance of the Symphony No. 7 in A Major. As the symphony came to a close on three thunderous chords, the audience jumped to its feet with rapturous applause! Truly a wonderful night of music making. 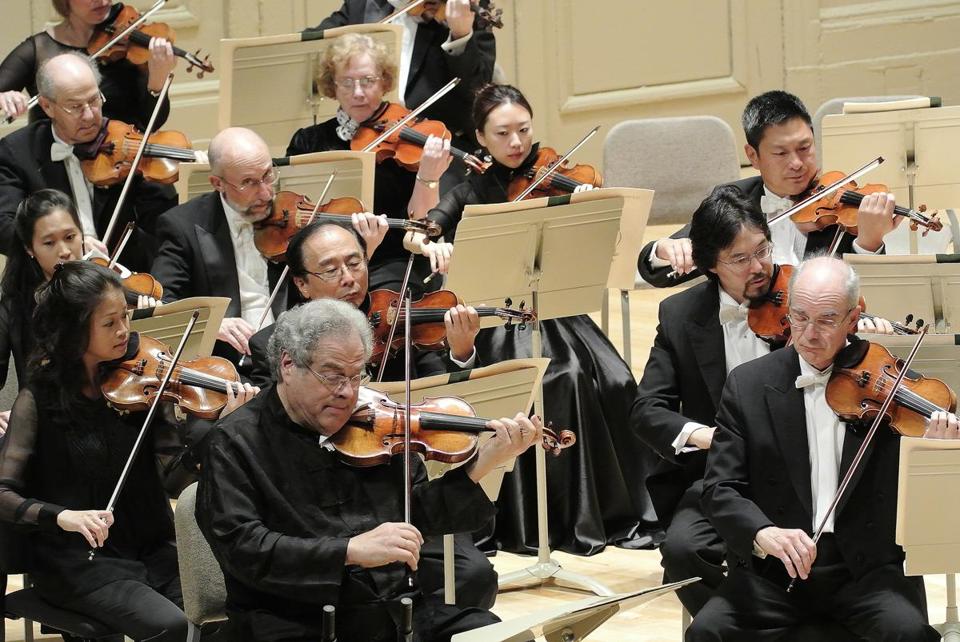 Then it was on to the New York Philharmonic, where Itzhak was featured as violin soloist on the orchestra’s Opening Night Gala in Avery Fisher Hall. He played delicious bonbons by Rimsky-Korsakov, Massenet, Tchaikovsky, Sarasate, and John Williams, complete with singing tone and characteristically brilliant showmanship.

Itzhak even found the time to hang out with Stephen Colbert!

The season is just getting started, and Itzhak can’t wait to visit old and new friends. Check out his schedule to find out when he will be visiting a town near you.

Live In Conversation at the Center for Jewish History

On Sunday, September 9 at 5pm, violinist Itzhak Perlman and cantor Yitzchak Meir Helfgot talk about their new Sony Masterworks CD “Eternal Echoes: Songs and Dances for the Soul.” This is a unique chance to hear the inside story of the new recording, preview some of the pieces included on the disc, and ask questions of these wonderful artists, as well as arranger and producer Hankus Netsky, who will join them on stage.  Mr. Perlman and Cantor Helgot will sign copies of their CD after the talk.  The event takes place at:

Itzhak Perlman’s new album, Eternal Echoes, featuring Cantor Yitzchak Meir Helfgot, is now available for pre-sale at Amazon.  The album is a collection of beloved liturgical and traditional Jewish works in new arrangements backed by chamber orchestra and klezmer musicians.  It’s in stores on September 4, just in time for the high holidays.

Eternal Echoes: Songs and Dances for the Soul

Eternal Echoes: Songs and Dances for the Soul from Sony Masterworks

“It’s so easy for him…it’s just effortless,” says legendary violinist Itzhak Perlman, explaining what led him to pursue his inspired collaboration with Israeli-born and celebrated Cantor Yitzchak Meir Helfgot. The melding of Perlman’s soulful tone and virtuosic technique with Cantor Helfgot’s spellbinding tenor come together perfectly on their new album, Eternal Echoes: Songs and Dances for the Soul, available from Sony Masterworks on September 4, 2012.

While rooted in the cantorial-liturgical tradition of Jewish music, the ten tracks on Eternal Echoes encompass a wide range of sonic modes and musical moods. Perlman has said that his idea “was to do ‘Jewish comfort music’ – everything that I recognize from my childhood is in this program.” The recording grew out of musical conversations with Helfgot and long-time collaborator Hankus Netsky.  The two masters began to explore the confluences of sound between the violinist’s famed classical technique (informed by a longtime interest in Jewish traditional music – Perlman has recorded a number of klezmer albums) with Helfgot’s magnificent golden voice, which has made the cantor a star of today’s liturgical music revival.

“I always find that there is a real communication between voice and violin,” says Perlman, who also has recorded with Placido Domingo and Luciano Pavarotti. Like Perlman, Cantor Helfgot has performed globally to rave reviews.  Says Helfgot: “this was the fulfillment of a dream. When I was a child growing up I always knew about Itzhak Perlman, so of course I said yes, right away! I am very happy this dream became real.”

To craft the arrangements and play the piano parts, Perlman called upon Netsky, with whom he had collaborated on past klezmer recordings. Netsky aimed for “a beautiful chamber orchestra sound, nothing too ostentatious, to really let the soloists shine.” For five of the pieces he developed orchestral arrangements, and for the rest, other combinations that reflected the traditions of this music. “Cantorial music really developed almost like opera for people who didn’t have opera,” the pianist-arranger explains. “The text is the religious text, and you paint a picture with it musically.”

These exquisitely crafted musical pictures include a stately and dramatic arrangement of “Sheyibone Bays Hamikdosh,” a tune Perlman remembers from Shabbat morning prayers in Israel; the operatic “Shoyfer Shel Moshiakh ,” written by Abraham Goldfaden, father of the Yiddish theater; the shepherd’s lament “Romanian Doyne”; “Dem Trisker Rebn’s Nign,” a song Perlman learned from his klezmer collaborators; “Mizmor L’Dovid,” a setting of Psalm 23 which may be the most famous piece on the album; and “A Dudele,” which comes from the folk rather than the liturgical tradition. The album wraps up with “Kol Nidrei ,” the famous prayer for Yom Kippur, in a simple chamber-music setting that contrasts tastefully with past grandiose arrangements familiar to fans of singers like Richard Tucker and Jan Peerce.

As reflected in its title, Eternal Echoes: Songs and Dances for the Soul evokes both history and permanence: “There is so much history in this music,” says Perlman. “For me, every little musical groan or sob that happens is Jewish history. It makes you think.”